“I’ve been in the construction business 35 years, and this was the most challenging project,” says Bob DiPaola of the two-year National Baseball Hall of Fame renovation. DiPaola is a Construction Manager with McCarthy Building Companies, the project management company and general contractor that coordinated 22 subcontractors and suppliers for this landmark project in Cooperstown, New York. Many factors combined to make it such a challenge, but all involved agree the greatest obstacle was keeping the Hall of Fame open every day (it serves over 1,000 people daily on average), making as many collections available as possible while ensuring visitor safety. 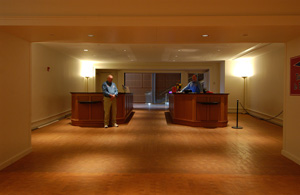 Playing for the Fans

The project’s major goal was enhancing the visitor experience, but upgrading the HVAC equipment that protects the museum’s precious artifacts was just as vital. Of particular importance is the 2.6-million-piece library collection, which includes more than 400,000 irreplaceable photographs and 10,000 hours of recorded media. The Hall of Fame also houses 35,000 physical artifacts, including 1,796 baseball bats belonging to players such as Babe Ruth, Hank Aaron, and Cal Ripkin and 869 jerseys once worn by history-making ballplayers such as Jackie Robinson.

The Game Must Go On

Keeping this collection safe and available to the public during a major construction project was difficult, but doing it under rigid time constraints posed an even greater challenge. McCarthy had to work against a grueling schedule to accommodate the Hall’s annual induction of new ballplayers each summer during Hall of Fame Weekend, an event that draws between 15,000 and 20,000 visitors, dignitaries, and Hall-of-Famers to Cooperstown.

The town’s residents number just over 2,000, one-tenth the population of its visitors that weekend. Cooperstown practically bursts at the seams during this major event, sometimes filling hotels and bed-and-breakfasts within a hundred-mile radius of the museum. Of course, there’s also the famous springtime Hall of Fame Game, which pits two professional teams against each other and sells out the Hall of Fame’s 10,000 ballpark seats quickly.

The renovation simply had to reach acceptable stages of completion to accommodate these time honored events. To do this, McCarthy broke the project into five phases, attacking various
parts of the Hall of Fame at different times and keeping as many galleries open as possible. According to DiPaola, “Parts of the schedule were so demanding the general contractor worked from 6 a.m. to 10 p.m.” Workers would have worked longer if not for the Cooperstown noise ordinances.

Weather conditions added another difficulty. DiPaola says, “The project lasted through two winters with record-breaking weather conditions. Temperatures were as low as minus 29°F we had 10 to 12 feet of snow each winter.” The McCarthy team structured the project so the buildings were sealed during the really frigid times. But this wasn’t easy because the team was trying to create a single structure out of several disparate ones.

The Hall of Fame complex comprises seven buildings that evolved over six different expansions. These structures were built between 1889 and 1995 and, by necessity, linked in ways that made them difficult to access by those with disabilities and confusing or uncomfortable to visitors.

There were dead-end corridors, for instance, and a single ticket booth that just couldn’t keep up with the long lines of baseball fans. It might have been easier for McCarthy to just tear everything down and start over, but that was impossible. The museum had to keep the galleries open for fans and protect the priceless baseball artifacts. Demolition of the older structures would also have been against the law. The original Hall of Fame building, which opened in 1939, is protected by National Historic Register status. 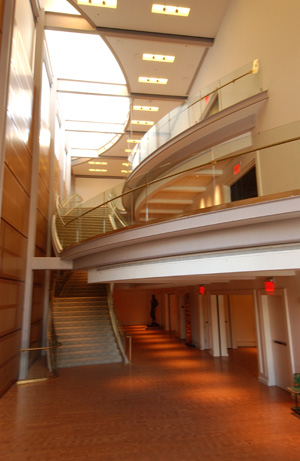 Stepping Up to the Plate

McCarthy worked hard to unify the various old buildings and systems that comprise the Hall of Fame. Only one of the museum’s seven buildings was knocked down, making way for a grand staircase that sweeps visitors to the different floors and galleries.

The project also included a new roof, which made it possible to raise the ceilings and visually unify the overall structure. This project phase required the general contractor to cut through
the old roof plus four floors, sinking 11 55-foot columns through to the basement to support the new roof. 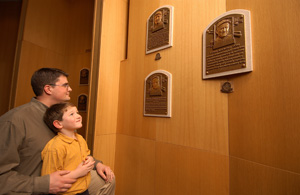 One can only imagine how intrusive the infrastructure work was, especially regarding the Hall of Fame’s outdated electrical system. McCarthy relied heavily on Matco General Foreman Dan Dvorsky, who, according to DiPaola, was a wonderful field supervisor. There were four floors of antiquated electrical panels, equipment, and conduits that Dvorsky and his crew had to monitor and clear as McCarthy prepared to install the support columns.

That was not the hardest job, however. According to Matco Project Manager Mark Freije, “The most challenging aspect from an electrical standpoint was replacing the gear in the basement.” That was where Dvorsky really shone, devising a way to run gear through four very different buildings and unify it under one central control system. “We got out of the basement and into the different galleries in a building that was all chopped up — rooms at different elevations, floors not level with each other,” Freije says. “Dan planned his work and worked his plan, which is not something everyone can do, really. We would not have succeeded were it not for him. He was aware of everything going on; he followed the schedule and knew everyone’s needs and brought it all together.”

Matco replaced all electrical systems except the main incoming service. All this had to be done with a minimum of power outages, which could also last no longer than 10 hours. Working between Memorial Day and Labor Day, the Hall of Fame’s busy season, electrical workers sometimes had to do the shutdowns and, consequently, their work between 10 p.m. and 8 a.m. Matco also fitted the Hall of Fame galleries with more than 9,000 feet of state-of-the-art track lighting. The modular grid makes illumination completely adaptable. The circulation galleries plus another gallery are controlled by a computerized Lutron Dimming system. Graybar Electric provided Square D panels for the Hall’s electrical system.

According to Hall of Fame Facilities Manager Richard Dolhun, “The HVAC system is more energy efficient and has more control options. Each building was a separate entity before. We eliminated a lot of old switch gear from the late 1970s. We really had a mixed bag before the renovation,” he says. “We also took care of life safety issues, like full egress lighting and smoke evacuation.” Matco updated the building’s fire alarms as well. To complete the safety loop, the company installed a Caterpillar 400 kW outdoor generator supplied by Southwest Milton.

According to Dolhun, “This was probably the most challenging and intense period of my career. And I’ve been here for 18 years, so I have something to compare it to. I thought Dvorsky did a great job. Matco has a very good reputation and I can see why — because they do good work.”