When it opened in 1965, the medium-density fiberboard (MDF) mill operated by Norbord Industries, Inc., in Deposit, New York, was the first in the world designed to produce this now widely used product. The Deposit mill represented what was then “state of the art,” and thanks to an aggressive and ongoing maintenance and upgrading program, it still does. 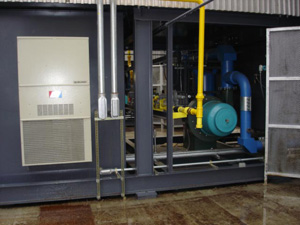 MDF is an important product for Norbord. The material, made in part from recycled wood fibers in a process that includes both heat and pressure, is used extensively for products like cabinets, paneling, doors, jambs, millwork, laminating, finishing, and moldings. The mill, Norbord’s only North American MDF mill, produces approximately160 million square feet (3/8″ basis) per week.
That translates to more than 100 truckloads shipped each week to key industrial markets in Canada and the United States.

So, when the mill was recently scheduled for an important upgrade of its pollution-control systems, finding ways to minimize the required downtime was a high priority. In fact, General Manager Sheri Weeks brought in a firm of scheduling specialists to handle the details associated with the project. The decision was made to schedule a seven-day shutdown, during which all the pollution-control upgrades and installation of a new wood-drying line was accomplished.

“This really was a major construction project,” observes Mark Freije, Project Manager for prime electrical contractor Matco Electric Corporation. “It involved a lot more than just installing new pollution-control devices. The plant’s floor plan was significantly rearranged, and the chemical-unloading dock was moved. We had to install 400 hp fans and the entire supporting electrical infrastructure. We had to work quickly with a whole series of specialized contractors who were also under intense time pressure. It made for a very interesting work site.”

Even before the project started, Matco had completed an extensive investigation of the new system’s power requirements and worked with Norbord and system designer Hinz Automation on the specifications and installation plans. While Norbord purchased all the equipment for the project, Matco worked with them and the supplier, General Electric, to develop specifications and coordinate delivery scheduling.

Matco also completed important work on the jobsite before the actual installation. Existing plant wiring scheduled for re-use was labeled, traced, and tagged, and new wiring was installed wherever possible while the plant was in operation. 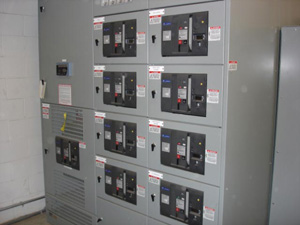 Equipment and components were staged on the jobsite so they were available when needed. Steel structures for the new equipment were preassembled, and motor disconnects and other devices were prefitted and installed to the greatest extent possible in the weeks before the scheduled plant shutdown. All this activity was fully coordinated by Project Manager Daryl Koch, the plant team, and the scheduling group.

Relocating the plant’s chemical-unloading area marked the beginning of the project. A new truck-unloading ramp and a spill-containment structure were built, along with all new pumps and plumbing.

Although Matco was the electrical contractor, the firm was heavily involved in this part of the project. While Matco installed a new control panel and all of the necessary wiring for the two-pump system, mechanical subcontractors were hired to move the plant’s wax-resin-unload pumping station.

RCO and RTO units are state-of-the-art pollution-control systems that destroy VOCs by thermally decomposing and then oxidizing them. They are fired by natural gas, and both are designed to recover much of the heat generated by the process, using it to heat the incoming waste/air stream to achieve high thermal efficiency and reduce operating costs.

Installation of the three RTO units was especially challenging because it required replacement of two process cyclones that feed into a conveyor system used for the process with a four-cyclone unit.

This phase involved replacement of the cyclones, plus their support structures and the conveyors. This part of the project needed to be accomplished during the shutdown while the other work was ongoing. 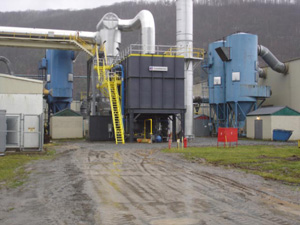 A significant upgrade of the plant’s substation and electrical infrastructure was required to support the mill’s new systems. Matco installed a 5kV feeder and a 2000 kVA outdoor,
oil-filled transformer. Inside the plant, Matco constructed a control room to house the variable-speed motor controls needed for a pair of 400-horsepower electric motors to drive the fans feeding the pollution-control systems.

Seven Matco electricians, including Foreman Paul Miller, were on the job from the beginning of the shutdown until installation was completed. In addition to the infrastructure work and installation of the pollution-control systems, they also performed a variety of maintenance and upgrade operations on plant equipment, often while waiting for other subcontractors to finish their tasks.

“There really was a lot going on,” recalls Miller. “The scheduling was very tight, but we were able to complete most of the prep work by working around the other contractors. We would go as far as we could with a job — running conduit, setting junction boxes, pulling conductors
— and then move on to something else while other equipment was moved or installed.

“At one point we also disconnected a 5kV motor so it could be removed. That wasn’t really part of the upgrade project, but we were there and had time to do it. So we did.

“It was an interesting week, but everything arrived as planned and was finished on time,” adds Miller. “It’s pretty impressive when you think about how much was going on.”

Norbord is an international panel board company based in Canada. Matco is a New York-based electrical contractor. The electrical engineering was performed by Hinz Automation, and KTC Panelboard was responsible for the foundation and slab on grade engineering, both of British Columbia. The pollution-control systems came from MEGTEC of Wisconsin. The subcontractors came from all over eastern North America. There were hundreds of people involved in the installation and supporting activities.

Specialist teams developed the specifications for the project, while Norbord handled the purchasing. Koch and his team at dispatch worked on the scheduling.

“I am not going to say there were no glitches and everything ran like clockwork, but in the end, it all came together on time and within budget,” notes Freije with satisfaction. “It was all completed safely. And when we threw the switch, it all worked. It is really amazing what you can do when you put the right people in place, and then let them do their jobs.”