In 1972, Wilson Memorial Regional Medical Center in Johnson City, New York, hired Matco Electric Corporation to install electrical systems in two newly added floors and one renovated floor. “We had to bring in power from the existing hospital and install lights, fire alarms, nurse-call systems, intercoms, and emergency generators,” says Matco’s Rod Gallagher, who is retired now but was General Foreman on that initial project.

When the job was complete, Gallagher felt good about it. “We were sensitive to the hospital’s needs,” he says. “While you never know for sure how a customer feels, I thought they would call us again for other projects.”

His words were a huge understatement. Since 1972, Matco has provided continuous electrical contracting, value engineering, and preventative maintenance services to Wilson Memorial and now to United Health Services (UHS), the hospital health care system Wilson joined in 1981. For 33 years, Matco has built or renovated more than 1.4 million square feet of space at UHS hospitals and clinics, which service eight counties in northern Pennsylvania and southern New York. The contracts have been worth more than $19 million.

According to Roger Brown, current Director of Facilities Engineering for UHS, the relationship between the two companies blossomed because of Matco’s approach to jobs. “Their attitude is to be cooperative, and they provide excellent expertise, scheduling, and work. Right from day one, Matco showed it was the best electrical contractor in town. It was clear it would be a valuable company to us over the years.” 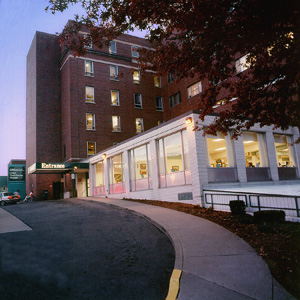 A Marriage that Works

Nate Foster, who retired from Matco in 2003 after 38 years with the company and four as UHS Project Manager, says Matco and UHS have always worked well together. “UHS has very intelligent managers with a great understanding of their facilities,” he says. “When they put a project together, it makes sense. They aren’t evasive or aloof. They aren’t trying to get something for nothing.”

Matco’s current UHS Project Manager, Marty Lewis, says the years of working well together have created mutual trust. “UHS knows we will give them a fair price and do an excellent job,” he says. “We know they provide the full project scope, and we will work together to control the costs. Much of the work we do for UHS is on a time-and-materials (T&M) basis,” Lewis says. “For example, we’re installing new fire alarms at Wilson Memorial’s five-story Picciano building. Because of this trust, this is a perfect project to do on a T&M basis due to the many phases of the work and the changing schedules. UHS saves money, as they pay only for the hours that are used and they purchase the material directly from Simplex. Not many customers would allow a contractor to do a project of this size on a T&M basis, but the mutual trust allows this to happen.”

A key factor in building confidence in each other has been Matco’s efforts to provide consistency in the people managing the account. There have been only four Matco project managers and three general foremen in 33 years. “That has allowed us to build solid relationships with our counterparts at the hospital,” says Lewis. “It has also allowed us to become very familiar with the facilities, so we can give valuable advice in planning and implementing projects.”

Brown says having the same project manager and foreman makes the relationship comfortable. “When you go out into the field to talk to the foreman, it is always the same guy,” he says. “You have the same guys in the office, too, ordering the materials and tools and lining up the men. They know us, and we know them.”

Being familiar with UHS hospitals has given Matco a real understanding of their needs. “One of the things about hospitals is we can’t shut them down to do work,” says Brown. “So if I have a major electrical project, I might have to do it on a Sunday at two in the morning when the impact on patients is minimal. Matco will show up at that time to do the work, never questioning the inconvenience.”

Foster recalls just such a project. This one involved upgrading and renovating the neonatal intensive care and maternity units at Wilson Memorial. “We not only couldn’t hinder ongoing operations, but we also had to limit any construction exposure — dirt, dust, noise, and spread of airborne contaminants,” he says. Those challenges were met because both companies communicate and collaborate so well. “With cooperation, you have good outcomes,” he says.

Knowing How to Get a Job Done

Matco’s expertise is another reason UHS has consistently turned to it. For example, Brown points to Matco’s maintenance of UHS’s high-voltage equipment. “That equipment is considered very dangerous,” Brown says, explaining that the local power company supplies UHS facilities with 15,000 volts of electricity, and transformers convert it to a usable 120 volts. The transformers and the high-voltage equipment must be cleaned periodically.

“My internal guys aren’t trained to do that work,” Brown says. “So I look for an outside company to do it, and the only outside company I would consider is Matco, primarily because of its knowledge and safety record.”

He adds that building and safety codes governing hospital construction are far more stringent than in any other industry. “Matco is the only company in this neighborhood that really understands what the codes are all about.”

During its years working for UHS, Matco has supplied valued engineering services that have saved UHS money, a real bonus in today’s cost-conscious health care environment. In 1988, when Wilson Memorial launched its Pathway 2000 project — a $30-million, 100,000-square-foot addition that included a new emergency room, nine operating rooms, and a cardiac catheterization unit — Matco recommended design changes for the generators and emergency circuits that saved UHS hundreds of thousands of dollars. “Matco also worked with us to get energy credits back from New York State because it installed some new technologies,” says Brown.

So where will this “marriage” go from here? “Matco is training its new people, and I’m training mine,” says Brown. “Even after I retire, I feel the relationship will continue at all levels.”

In fact, Matco is currently working on three projects at UHS facilities — the fire alarm systems in the Picciano building, the installation of a new state-of-the-art, high-energy radiation device called CyberKnife, and the renovation of a labor and delivery unit.

Brown explains that UHS’s slogan might best describe the Matco/UHS relationship. “Our motto is ‘Amazing Technology, Extraordinary Care,’” he says. “Our technology depends on our electrical systems. Without those, we couldn’t exist. So, we think, technology-wise, Matco is our partner. They bring the highest level of expertise, keeping abreast of new codes and products. Matco knows where the electrical industry is going. We believe our top mission is patient care,” Brown continues.

“Matco’s philosophy about taking care of its customers fits right in with that. Matco cares as much about our patients as we do. They’re here whenever we need them, they work overtime if I have a short schedule, they’ll work at midnight if need be. So we consider the company a partner in patient care, too.”